Welcome to Keep Them Safe Page

I first read about WWF in an Animal Magazine. I saw a pamphlet to adopt an Amur Leopard. At the time, there were only 45 left living in the wild. I sent the pamphlet off to confirm my adoption, and soon got my gift pack which contained info on the Amur Leopard I adopted and a plush toy. To my surprise, instead of receiving adoption confirmation for one Amur Leopard, I received confirmation for THREE! The three beautiful Amur Leopards I adopted were called Tolstyi, El'duga and Narva. Over time, Narva and E'lduga gave birth to some beautiful cubs and Tolstyi continued to be one of the oldest Amur. One day I received and update on my Amur Leopards. The update told me that the cameras monitoring the area, hadn't seen traces of Tolstyi in quite a while. Sadly, they presumed that Tolstyi had died. He had lived to a grand old age of twenty, which is unusual because the average life expectancy of an Amur Leopard is around twelve years old. I'm happy to think that because I adopted these three beautiful leopards, the number of their kind increased. I went on to adopt an orangutan called Koyah and a three-toed sloth. I hope you will join me on this journey to save the animals. 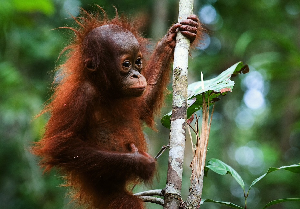