Axolotls...I was first drawn to them because they look like they belong in a science fiction movie...they are just so crazy cool! Axolotls, also known as "walking fish" are a critically endangered species found in Lake Xochimilco in Mexico. They are currently a critically endangered species due to industrial water pollution and invasive species like perch and tilapia. They are of special interest to scientists, because they can regrow their body parts!

I had 3 adult axolotls for students to admire in my 6th grade classroom. One day, after a long weekend, I came into my classroom and discovered much to my surprise 400 axolotl eggs in the tank--ooops!. I didn't realize what I had in the tank! Out of that group of 400 axolotls, 200 survived to adulthood. My 6th grade students have used them in a variety of scientific inquiry activities. Thank you for donating to this page! World Wildlife Fund is well-known for preserving endangered species around the globe. Since the axolotl is also endangered, we thought it would be a perfect-fit fundraiser. Thanks for supporting the saving of axolotls!!! 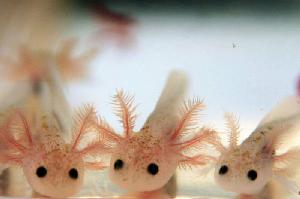 Axolotls are waiting for you!