For my birthday this year, I'm fundraising for the World Wildlife Fund. I'm reaching out to you - my community - with a hope of helping Amur tigers. It's an endangered species whose habitat is in my homeland where I was born and raised - Khabarovsk province of the Russian Far East.

Amur tigers were once found throughout the Russian Far East, northern China and the Korean peninsula. By the 1940s, hunting had driven the Amur tiger to the brink of extinction—with no more than 40 individuals remaining in the wild. The subspecies was saved when Russia became the first country in the world to grant the tiger full protection.
By the 1980s, the Amur tiger population had increased to around 500. Although poaching increased after the collapse of the Soviet Union, continued conservation and anti-poaching efforts by many partners—including WWF—have helped keep the population stable at around 540 individuals.

HABITAT LOSS
Tiger forests are at risk from logging, conversion to agriculture, urban expansion, road construction, mining, fires and inadequate law enforcement. Illegal logging is widespread throughout the Russian Far East and has a major impact on tiger populations because Korean pine and Mongolian oak provide critical food for the Tigers' prey during the snow season.

PROTECTING HABITATS
WWF has been instrumental in securing tiger habitat in China and the Russian Far East. The protected habitat includes officially protected areas and conservation leases that secure a continuous landscape for tigers. We also help attain sustainable certification for millions of acres of the region’s forests, especially to sustainably manage Korean pine and Mongolian oak trees.

ADVOCATING FOR IMPROVED LEGISLATION
WWF advocates for stronger logging and hunting laws as well as their enforcement. To reduce illegal trade, we help train and equip staff in the protected areas, support antipoaching brigades and train customs agents across the region.

RAISING PUBLIC AWARENESS
WWF strives to spread the word about the importance of a healthy Amur tiger population. We educate deer hunters on how to hunt responsibly and on how to behave if they encounter tigers in the wild. WWF also co-organizes annual Tiger Day celebrations in Vladivostok and in villages all across Primorski Province to get communities involved in tiger conservation.

“Amur tigers are a success story in the making only if we can protect them from poaching and ensure their forest homes remain.”
Dr. Sybille Klenzendorf, Senior Species Expert
Ever since I was a little girl, my parents educated me about the Amur tigers and the importance of preserving this rare species. They've brought me to see them live in the conservation areas and I was in awe of their majestic beauty and grace.
This cause is very close to my heart and I hope that together we can make a difference today!
Please join me in this important work by making a donation today.

Thank you for giving what you can! 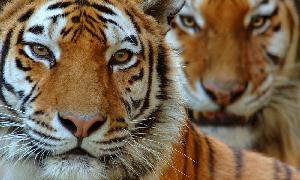 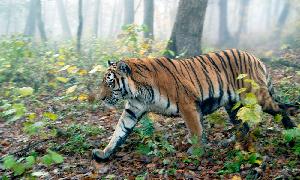