Help me save the endangered,western lowland gorilla

Recently I watched the documentary, ' Virunga' on Netflix which displays the conflict between conservationists, poacheres and rebels within the Virunga National Park in the Congo. It inspired me to take some action after watching this documentary and fundraise $1000 in order to protect one of the most critically endangered species on Earth, the western lownad gorilla. It is found in the vast lowland forests of central Africa as well as the Virunga National Park ; is estimated that there are just 100,000of them left in the wild.

Why are they endangered?

Their greatest threat comes from humans: poachers, deforestation and the spread of diseases. The hunting of the western gorilla is used for bush meat, as pets or to be sold in zoos and circuses. Deforestation for the clearing of land for agriculture, illegal logging and mining leads to their habitats being lost and the reduction of their species. Through deforestation humans clear land to create farms and settlements closer and closer to gorilla habitats , increasing the spread of disease like the flu to gorillas. Gorillas have weak immune systems so coping with disease can be fatal for them and apart from diseases like the flu they are also vulnerable to Ebola, which is able to wipe out an entire population of them without the help of medics.

How are you helping?

Your generous gift will go towards the protections of this species around the globe in order to ensure more legal action and policies from governemnts are put in place to conserve this species, provide further funding to conservationist looking after these gorillas before letting them free in the wild after they have been rescued, and finally decrease the chances of this species going extinct. Lets work together to save the species and ensure it lives on for centuries ahead.

Please join me in this important cause by making a donation today. 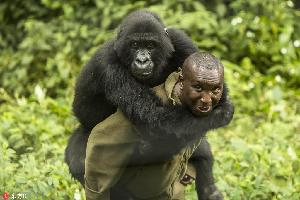