There is an estimated 3,200 wild tigers left in the world; a century ago there were 100,000. Tigers are perilously close to extinction, some experts suggest no more than a few decades away. David Attenborough said "It’s a moral question about whether we have the right to exterminate a species.” If there was ever a time for people to consider this question, the time is now. Only six subspecies of tiger still exist, in the past century three subspecies became extinct. Overall, the wild tiger population has decreased by 97% in the past 100 years. Poaching and illegal wildlife trade is a big contributing factor to the tiger’s declining numbers. Poachers will sell all the tiger’s parts on the black market, including their claws, whiskers, skin, bone, and meat. Habitat loss is also a contributing factor to the tigers decline, 93% of their historic range is now gone due to deforestation and development activities. The tiger stands for beauty, strength, power, and courage. It’s a fighter, and right now it’s fighting for its survival. However, the tiger can’t win this fight alone, it needs your help. Jane Goodall said “We have the choice to use the gift of our life to make the world a better place, or not to bother.” Help to make this world a better place by making a donation in honor of Global Tiger Day to my fundraiser page for WWF. WWF is working every day for the protection of all endangered species. We have already lost too many species; we can’t afford to lose any more.

Please donate to my page!

Thank you for your time, 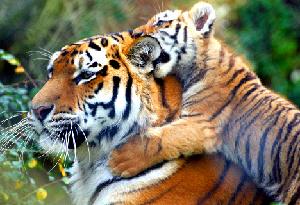 When you stop caring, we dissapear.
Donors to this page
Anonymous
$25
Seth Landry
$25
Briana Landry Holtman
Stephanie and Steven Poss
$10
Anonymous
$5
Add your name to the list - Donate today!